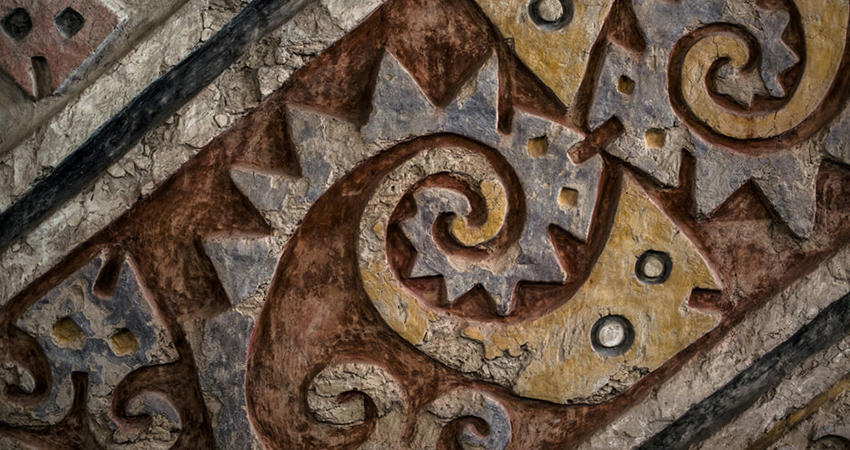 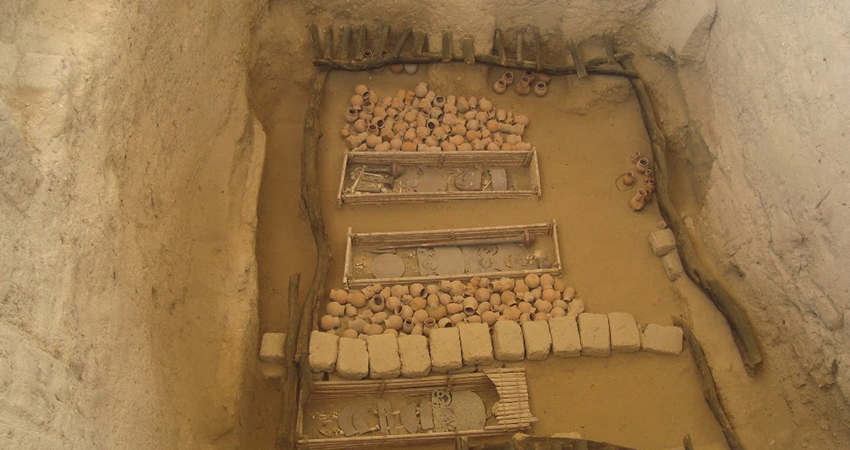 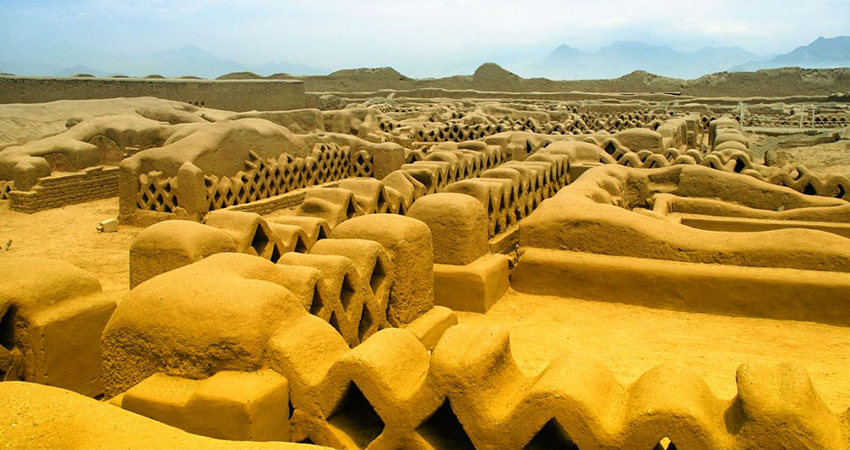 The Moche or Mochica Culture developed on the Northwestern coast of Peru, between 100 and 700 a.D. The remains, found to this date, of Moche temples, palaces, fortifications, irrigation works and cemeteries, show the high development level achieved by that culture, as much in art, as in technologies and social organization.

They developed their architecture, on the basis of the “adobe” or large sun-dried mud brick, to build religious and administrative complexes, as well as temples, with truncated pyramidal shapes, the walls of which were covered with high and bas-relief murals painted in colors made with natural pigments, like in the Huacas of the Sun and Moon, in Trujillo´s Moche Valley, for example.

They skillfully developed their hydraulic engineering, through the construction of irrigation canals and dams, which allowed them to expand their agricultural boundaries.

They stood-out as navigators, as they built the totora “caballitos” (Little horses) which they used to sail the sea to Ecuador´s coast, where they´d bring the Spondyllus seashells from, as these were sacred to them, and also used to trade these shells against valuable products or goods.

The Moche Route is a tourist axis between the departments of La Libertad and Lambayeque, about 700 km (434 miles) North of Lima, where the Moche Culture developed, and where we can visit the archaeological sites of: The Huacas of the Sun and Moon, in the city of Trujillo, the “El Brujo” Architectural Complex, in the District of Magdalena de Cao, where the Lady of Cao´s tomb is located, in the Province of Acope, 60 km (37 miles) from Trujillo, as well as the Lord of Ucupe´s tomb, in the District of Lagunas, in Chiclayo.

The best museums are located in the cities of Chiclayo and Lambayeque:

The World Tourism Organization granted the Ulysses Award to Peru´s Ministry of Tourism, precisely for promoting and developing tourism on the Moche Route, in Northwestern Peru.

Welcoming reception and transfer from the airport to your hotel.

We´ll start with the guided visit at the Rainbow Huaca´s restored ceremonial area. Then, we´ll visit the Site Museum that exhibits original pieces found in Chan Chan. Afterwards, we´ll move on to Chan Chan´s archaeological area, and to the Nik-An Palace which is the only one accessible to the public.

Finally, we´ll end our tour at the famous Huanchaco Beach, where we´ll have a chance to see the surf-like fishing rafts called “Caballitos de Totora” (Little Totora Horses) that have been used by local natives, since pre-Incan times, to fish and ride the ocean waves.

Indication: On Mondays, the Site Museum is closed.

Guided visit of the Moon´s Huaca which is a pyramidal structure erected by the Moche Culture (100-750 a.D.), and decorated with beautiful mural paintings, with representations of the Moche God “Ai-Paec”, also known as the “Throat Cutter”. Afterwards, we´ll visit the Moche Huaca Site Museum that displays samples of the excavations performed on the site, together with several multimedia presentations.

We recommend you to go on the guided city tour, in the morning, on Mondays, Fridays or Saturdays, ´till 1:00 p.m.

In the morning, transfer from Trujillo to Chiclayo, aboard a private vehicle.

On the way to Chiclayo, guided visit of the “El Brujo” Architectural Complex, located one hour away from the city of Trujillo, to the North, in the Magdalena de Cao District, where there are three Huacas: Huaca Prieta, Huaca Cao Viejo and Huaca Cortada which was an architectural complex inhabited by Moche people. However, the guided visit will only be possible at the Cao Viejo Huaca, since the other two huacas are presently subject to scientific research, and are closed to the general public.

As part of the complete tour, we´ll also visit the Lady of Cao´s Museum, where that young woman´s mummy can be seen, covered with tattoos and jewels.

Upon arriving in Chiclayo, guided visit of a valuable collection of over 1,400 archaeological pieces belonging to the Lambayeque, Moche, Chavin, Vicus and Incan cultures, that date back to up to 1,000 years ago, as the heritage left to us by Archaeologist Hans Heinrich Brüning, who spent 50 years of his life researching those cultures. In that museum´s gardens, one can appreciate the statue of Naylamp who was the founder of Lambayeque´s dynasty of kings.

Guided visit of the Huaca Rajada Architectural Complex (Lord of Sipán), where the intact remains of a high dignitary of the Mochica Hierarchy were discovered, in 1987, although new personages of the Moche Culture are still being found up to this day. Then, we´ll visit the Site Museum, where the objects found in the excavations are on exhibition.

Warning: We recommend you to take insect repellent along, and to put it on.

Inside the Royal Tombs of Sipán Museum, are the Lord of Sipán´s remains and treasure, as Latin America´s most important archaeological finding, in the past 30 years, that includes an impressive collection of fine gold and handicraft objects.

Indication: The museum is closed on Mondays.

Transfer to the airport

Welcoming reception and transfer from the airport to your hotel.

A.M.: Transfer aboard a private vehicle, from Trujillo to Chiclayo,

On the way, guided visit of the “El Brujo” Architectural Complex

Transfer to the airport